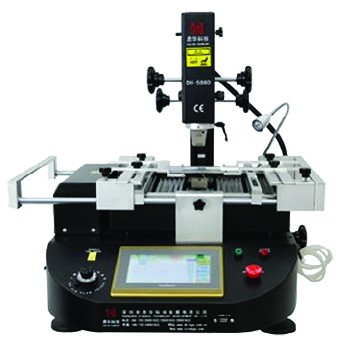 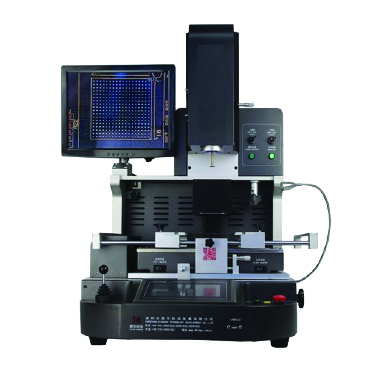 In the process of mounting the parts (BGA) on the PCB board using SMT (Surface
Mount Technology), rather than disposing of the PCB board when the component
is dislodged(uninserted, inverted, etc.),  it replaces certain components with new
products or rework. It is a task to make PCB board work.


[ Automation System ]
Equipment that can be attached and detached by using an automated BGA rework station equipped with
a monitor when it is difficult for an operator to attach components to the PCB board.

[ Manual Equipment ]
Equipment used for large parts or parts that are not difficult to remove or attach.


Parts of smartphones released today are difficult to replace.  In particular, the BGA and CSP types, which are high integrated circuits, have wrong
temperature and time. If set, thermal damage can occur to the Ass’y board as well as peripheral components, which can cause problems.
In order to solve the deformed or damaged parts while replacing smartphone parts, equipment and profiles with accurate temperature
and time work are required. Need equipment and accurate profiles possible. To prevent these component deformations, rework equipment has
been developed to provide accurate temperatures and times.
It is mostly used in Smartphones, navigation systems, tablet PC manufacturers, and small laboratories that require small PCBs.
The rework station, which is competitive in price by removing expensive IR heaters that are not effective when working on small boards, and by
compensating for shortcomings such as melting down the peripherals of an existing hot air balloon, is able to apply the profile name as the word
that engineers such as the service center want to use, and has an export/ recall function of the profile using SD card.
It can also standardize repairs by sending files to anywhere in the world.
In addition, the temperature setting screen allows the temperature and time of the upper and lower parts of the product to be set precisely in
nine stages. Also, through the real-time display window of the work screen, the progress section of the upper and lower temperature sensors and
the current temperature can be checked in real time. When the basic information of PCB and the adjustment of solder are selected and executed,
the temperature of the upper and lower heaters can be controlled by the equipment according to the temperature measured by the temperature
sensor, and the set value can be automatically saved in the program name set after the operation, thereby increasing the efficiency of the work.

There are no registered comments.